The following post is from Sharita, a UCP Community Employment Program client placed at the PNC Operations supported employment worksite. Sharita has been working at PNC Operations for a little over a year in the Image Retrival Department completing document processing requests from different departments and customers.  She enjoys working at PNC and has developed relationships with the host staff as well as her co-workers. She is very well-liked in her department and the PNC Supervisor frequently has positive things to say regarding her work performance.

Sharita lives with her family including her mom, dad, twin sister Shaye (who is also a client with UCP and works at the Cleveland Clinic supported employment worksite) and her two brothers. In addition to participating in Special Olympics, Sharita also participates in a bowling league and she enjoys reading, using the computer, writing, singing and acting, bike riding and spending time with her family at their RV Camper. 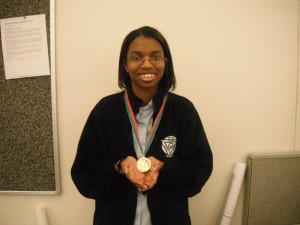 Special Olympics Ohio is one of the best extra-curricular activities I have been in. I am involved with Trinity Special Olympics in Lakewood Ohio and I have done speed skating and figure skating. The local coordinator always pushes me to do my hardest and I owe it all to her. There were some times when I didn’t feel like giving it my all, or when I was in a bad mood, and in spite of everything, all the ups and downs, she was always there to help me pull through even the toughest of jumps and spins and footwork. We also have a number of volunteers who work endlessly with me and other athletes to make sure we do the jumps, the spins, and fancy footwork. They work just as hard as the coordinator. They all are great and I look up to them.

I got my start with skating lessons when I was four years old. I don’t remember that much, but my parents do. Every time I would go to skating lessons, they said, I would just sit there on the ice and cry, “I don’t want to be here!” Looking back, I’m glad now to be there and try my hardest. Four years later when I was eight, I started speed skating, and it was great fun. I loved to go fast. One time, I raced against my sister, Shaye, and came in first place. That was the first gold medal I ever won. Then, my tastes changed and from the age of nine onward to twenty-one, I along with Shaye started figure skating. We started competing in regional and state competitions, and now I have completely lost count of how many gold, silver and bronze medals we’ve gotten. We’ve also become involved in a couple of big ice shows that we did back in 2006 and in 2007. The first one we did was called “A World of Difference,” and we skated to different cultures of music and wore different costumes to the theme of music. Shaye and I represented Germany and skated to German music. Then we joined two group numbers in which we were members of the Congo and the last number was from Canada. The second ice show was “Ice Tales,” and we skated in character to four classic fairy tales with a twist. I was a candlestick while Shaye was Belle in “Beauty and the Boy Beast” and then I was Cinderella while Shaye was a ballroom dancer in “Cinderella.” It was so much fun and I really had a great time. I love to perform both on stage and on ice. Plus, it’s a way to get some good exercise. The other thing I like about ice skating is the dresses I wear and I also like the music I skate to. This year, I skated to “Chicago” and I wore a tuxedo skating dress. Shaye skated to “West Side Story” and she wore a black and red sleeveless dress. The skirt was adorned with roses and it looked very pretty.

Shaye and I have also been asked to sing the National Anthem at regional and state competitions. And of course, we always say yes. We have been singing ever since we could talk, really, and it just comes naturally to us. After singing at a regional competition at Kent State, a man from Special Olympics asked me and my sister to sing the National Anthem at the Indians Stadium last August and we also were asked to sing at a Lake County Captains game in June. Excited, we accepted. At the Captains game, we sang, and one of the baseball players gave us each a baseball. We were awed. Then, in August we sang at the Indians vs Angels game and it was a success.

At the end of the year our skating team always has banquets . This year we had the end of the year banquet at Brennan’s and they had the best food there. The athletes are always given awards as well as the volunteers. Every year we always come together to give a gift to the coordinator as a token of what she has given us. And as our Special Olympics Oath says, “Let me win, but if I cannot win, let me be brave in the attempt.”

I’m so glad to be with Trinity Special Olympics and I love to compete, and have fun, too. I hope that whatever you’re doing outside of school or work can motivate you to try again whenever you don’t succeed the first time.