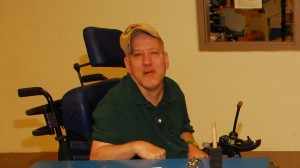 Denis was a resident of the Edendale group home for 17 years. While the group home offered him a supportive, structured environment, Denis always wanted to be able to determine his own structure; a structure that was not mandated by state standards, a structure that was not shared with seven housemates.  Denis wanted to make his own choices, and truly strived for self determination.  His dream was to move into the Parma community, connect with old friends and family in the Parma community, and be as independent as possible.

In June of 2011, Denis dream turned into a reality.

Denis was on waiting list for an independent living waiver. This waiver would qualify him for services in an independent living environment.  In the spring of 2011, Denis’ name was next on the waiting list to be awarded the waiver.  Denis was so happy. Together, United Cerebral Palsy of Greater Cleveland and Cuyahoga County Board of Developmental Disabilities coordinated with community resources to locate Denis an apartment that would meet his needs, and wants. Denis wanted to live in the Parma community, and wanted to be close to a coffee house.

As with any transition, there were some challenges.  However, Denis finally visited his new apartment in Parma, in May of 2011. He moved in June 10th, 2011. The leasing agent for the apartment building graciously agreed to permit the necessary accommodations and adaptations to the apartment unit to meet Denis’ needs.  Tracking was installed throughout the unit to assist Denis with lift transfers.  Rails and other equipment were also purchased and installed to make this apartment a healthy and safe environment that met Denis’ needs.

Starbucks is just around the corner.

After years of waiting, Denis has achieved the independence that he has dreamed of for several years. He is so happy with his new environment and truly is enjoying the transition into independent living. His courage and determination are qualities that should motivate anyone who reads his story.  Please congratulate Denis on this achievement, you can find him at the local Starbucks on the weekends.