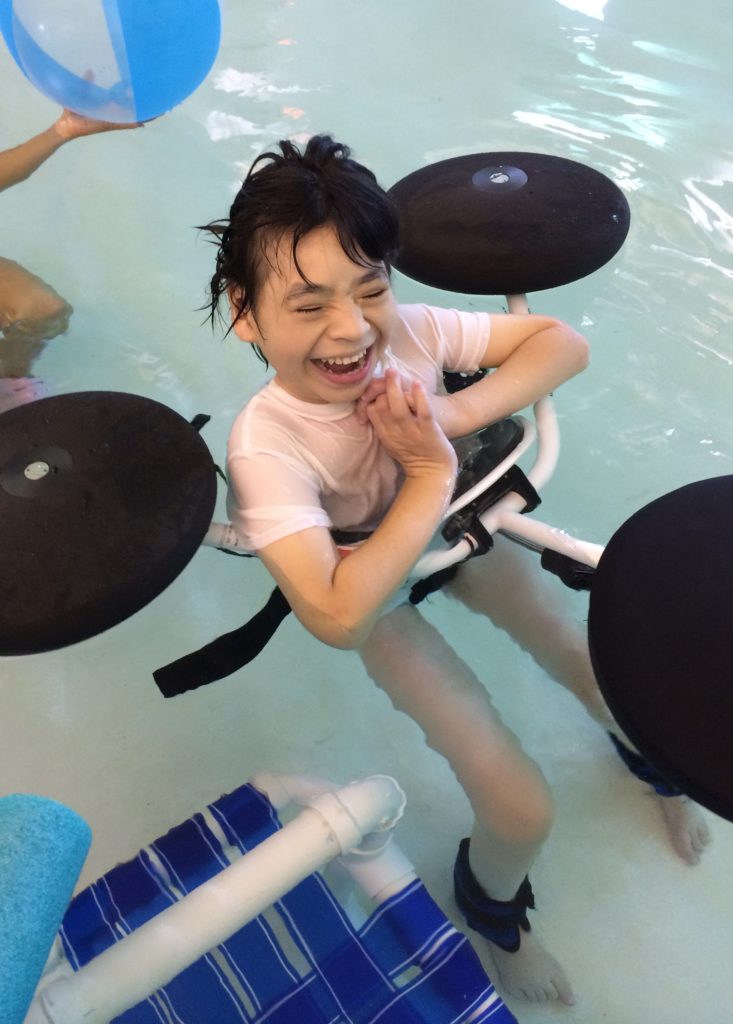 Evan began his journey at UCP when he was eight years old participating in a Steps to Independence session at LeafBridge. Steps to Independence is a unique, intensive therapy approach that helps children with cerebral palsy and other motor disorders achieve a higher level of functioning. The Steps session went well, and Evan’s mom liked the family-focused environment at LeafBridge as well as how nicely the therapists engaged with Evan. She decided to move Evan’s traditional therapy from a local hospital therapy program to LeafBridge. He is now 15 years old and making improvements to help balance the obstacles that he faces on a day-to-day basis.

Evan’s progress was slow going in the beginning of his time at LeafBridge, but that all changed when he was introduced to our aquatic therapy. Evan’s mom was the advocate for him to begin therapy in our pool and soon after the addition of water, therapy breakthroughs started to appear. “I love the way they work with the families and they made it work for Evan to start swimming.” said Evan’s mom. After about a month of being in the pool something “clicked” within Evan and his body—he became more motivated, excited about therapy and more aware of his body. Evan’s favorite day of the week is when he is in the pool.

Evan’s pool therapy includes work on walking, standing and kicking on his own. Evan has had sensory issues in the past with his feet, but since participating in aquatic therapy, he has become more comfortable with being barefoot in the pool and even around his house. This therapeutic intervention has led to a pivotal point on Evan’s personal timeline, marking a tangible point where he began achieving more during therapy and becoming more independent.

When asked why they have decided to stay with UCP throughout the years, Evan’s mom made it clear it was for one reason: the staff. “The therapists at UCP are always furthering their education so they can learn ways to help serve the children in the best ways available.” Evan’s team of therapists have various goals for him that include working on shifting his weight, reaching more on his own and supporting himself by placing his hands down before standing up. Every day Evan is making progress on his goals and he currently has a personal record of standing on his own for one minute.

With the help of his therapists, Evan is no longer content with staying in his wheelchair and is displaying more signs of wanting to be active and engaged with his surroundings.