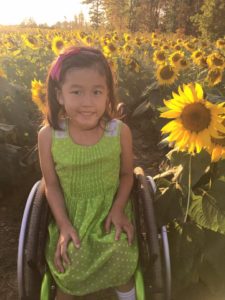 Josie is a charming 5-year-old who loves princesses and, in typical princess fashion, loves to be the center of attention. Josie began coming to UCP’s LeafBridge Therapy Services in October 2016 about a month after she was adopted from China. Serial Casting was the first step in her therapy plan to help straighten her feet, and more importantly, give her the ability to wear shoes – because every princess needs the perfect shoes!

Josie’s mom chose LeafBridge therapy services because it was the only facility she could find that had physical and occupational therapists in one building. She insists that a place like LeafBridge, where therapists can talk to one another and co-treat a child together, ensures the best possible care for any child.

In April of this year, Josie’s Physical Therapist, Laurene, noticed that one of Josie’s legs seemed tighter than usual. Laurene was extremely thorough in problem solving potential causes and communicated these subtle changes to Josie’s neuro-oncology team. Josie had a spinal cord tumor and these changes potentially signified that her tumor was growing. Josie had an MRI within weeks and it was discovered that her tumor had, in fact, grown further up her spine. Surgery was immediately scheduled.

Josie’s mom recalls, “Our MRI was not scheduled until August and waiting that long could have caused loss of abilities that couldn’t be regained. We are so thankful to Laurene as her quick action ensured that the tumor couldn’t grow more and cause permanent damage to Josie’s arms.”

With her surgery behind her, during which everyone referred to her as “Princess Josie” (she wore her very own tiara before and after surgery), Josie is looking forward to joining a wheelchair dance team in the beginning of 2018!