Transitioning from School to Work

Give yourself a pat on the back! You’ve completed high school and the world is yours for the taking…entering this new chapter in life is exciting, but making decisions about the future can be overwhelming. Fortunately, there are options available for young adults with disabilities choosing to make the transition to the world of work directly after high school.

Last year, UCP of Greater Cleveland partnered with an organization named Project SEARCH. With origins in Cincinnati and locations throughout the US and abroad, this growing program was developed to provide on the job training and employment opportunities for students with disabilities. The ultimate goal is competitive job placement at the host site or within the community. The Project SEARCH program in Cleveland is located at Parma Community General Hospital and five interns from Parma and North Royalton Schools were enrolled during the 2010-2011 school years. 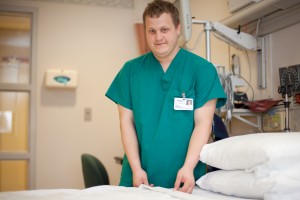 Ron was the one of the students enrolled to participate in Project SEARCH during the 2010-2011 school year.  He completed three internship rotations at the hospital including working in the Storeroom, Cath Lab/Heart Center and Healing Grounds Coffee Shop. With the support of the onsite Project SEARCH Instructor (Laura Crandall, Parma Schools) and Job Coach (Mietta Roberts, UCP), Ron readily developed professional work habits and learned diverse work skills. Ron found success upon his completion of the Project SEARCH program. He completed an assessment at the Cleveland Metroparks Zoo in May and became a member of the site in July. Ron’s job duties at the Zoo include directing traffic at the crosswalk and working at the main gate and exhibits throughout the Zoo. Ron stated, “I learned how to respect others and work with people while in Project SEARCH,” a feature that will guarantee Ron’s future at the zoo.

The 2011-2012 year of Project SEARCH at Parma Community General Hospital will be starting on August 24th. The new class will be comprised of seven students with disabilities destined to advance their job prospects, helping to ensure their transition from school to work will be a successful one. UCP is also working to establish sites in Lorain and Lake Counties.  To learn more about our local Project SEARCH program, go to the School to Work Transitions page of the UCP website.

©2023 UCP of Greater Cleveland. All Rights Reserved. This website was developed through a grant from the William J. and Dorothy K. O’Neill Foundation